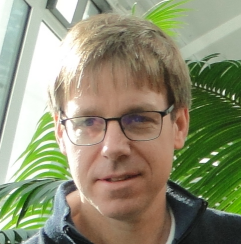 ​Olivier White completed his master in Computing Civil Engineering at Université catholique de Louvain (UCL, Belgium, 2000). Then, he worked in the Rehabilitation Unit (medicine faculty, UCL) as a software and hardware engineer to create an experimental platform dedicated to measuring human motor adaptation in altered gravitational environments. His PhD, conducted at the Systems and Control lab (Louvain School of Engineering, Belgium), focused on the role of gravity in the control of dexterous manipulation. Between 2007 and 2009, he was a post-doctoral fellow at Bangor University (UK) to investigate motor control in redundant systems (advisor: Dr. Jörn Diedrichsen). Then, Olivier White worked for 18 months at the European Science Foundation (Strasbourg, FR) to coordinate research actions, manage projects in the Space domain and coordinate international peer-review activities for scientific proposals dedicated to the International Space Station and ground-based facilities. Olivier White is PI and co-PI of several international networking and scientific projects (e.g. ESA-funded delta-g Topical Team).

Olivier White is now an associate professor in Computational Neuroscience at Université de Bourgogne and INSERM (Dijon, FR). He was awarded a “Chaire d’Excellence” fellowship for 7 years (120 000€). He supervised 20 master theses (some led to publication) and one PhD student. Finally, he is also visible internationally through his many collaborations (e.g. J. Diedrichsen, CA; J. Babic, SI; JJ Orban de Xivry, BE; N. Goswami, AT), publications, invited talks, presence in editorial boards and his constant involvement in the coordination of peer review missions.

Last century, he rode across the US with his bicycle (see cover and summary of the book we wrote). He looks forward to doing something similar with his family... in a few years.

His main research interests are devoted to motor control and learning using space environments or analogues as stressors. These research questions are addressed through a complementary set of techniques such as haptics and 3d virtual reality, object manipulation, neuroimaging and eye movements. Olivier White also develops new projects that aim at translating basic mature research into society. Since 2017, he is Honorary Senior Lecturer at University of East Anglia which provides an ideal context to pursue his collaborative work. Finally, he is also visible internationally through his many collaborations, publications, invited talks, presence in editorial boards and his constant involvement in the coordination of peer review missions.